To achieve its goals, the project started with evaluating the current HRT system to better understand its performance in a larger context. HRT bus service was compared against similar transit systems operating in nine mid-sized regions: 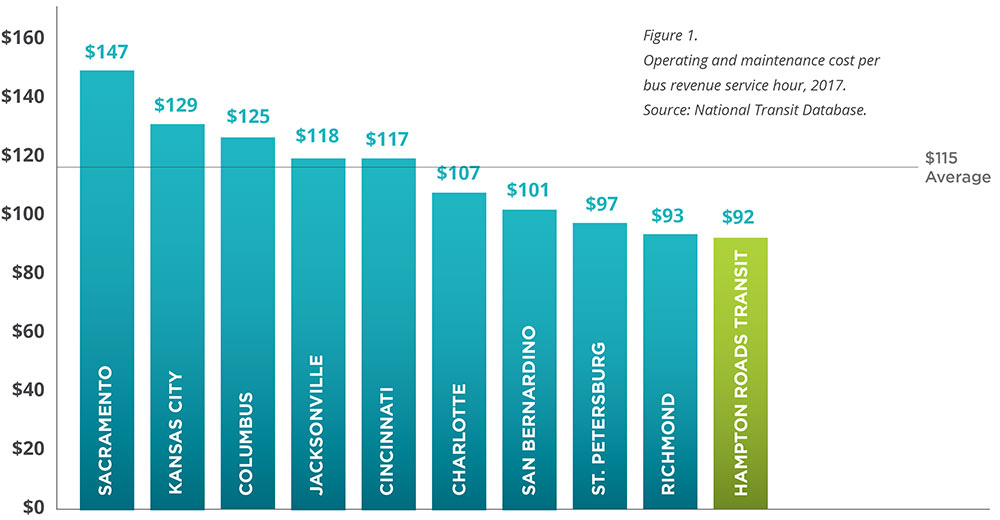 Low operating costs. HRT’s cost to deliver a unit of bus service – that is, all operating and maintenance expenses needed to run one bus for one hour – was found to be the lowest among the 10 regions studied, 20 percent below the average (Figure 1).

HRT is doing a better-than-average job at managing the largest sources of cost in its operating budget – salaries and benefits. This finding suggests that the most important opportunities to improve HRT’s performance are more likely found in other areas.

Poor ridership yields. HRT is attracting riders less successfully than other bus systems, after controlling for the amount of service offered. Agencies were compared to see how many hours of bus service were required to generate 10,000 rides. HRT was found to require 25 percent more service than average to achieve this. This can be explained by many factors, including a pattern of service that runs significant amounts of bus service in locations and at times of day where demand is particularly low.

This finding provided a strong indicator for the kind of reform that could improve HRT – that is, a major re-think of where and when service is offered. Achieving better alignment of HRT’s bus service (locations served and levels of service) to support better ridership can mean fewer cars on the road, more agency-generated revenues through passenger fares, and less financial burden on taxpayers.

Low levels of public investment. Like all transportation (roads, bridges, tunnels, etc.), public transportation requires taxpayers’ investment. To cover their costs, transit systems nationwide receive direct funding from government. In Hampton Roads, local governments pay into the HRT system each year from their general operating budgets. In contrast, most other regions of similar size rely on dedicated funding from sales taxes or other sources.

When compared to its peers, HRT receives 22 percent less funding on a per capita basis than average (Figure 2). In addition to the agency offering the best possible service using whatever funds it receives (i.e., optimizing the use of existing resources), this finding suggests that increasing the overall level of financial support for public transit in Hampton Roads should be considered.